We are looking for a male dancer over 21 years old for a continuing project with strong improvisational & partnering skills, along with solid modern / ballet training. A background in martial arts, yoga, or meditation is a plus. You should be open to working in a process-oriented way as the work is extremely collaborative, and based in meditation and improvisation. Dancer must be available to commit to Tuesday night and Thursday morning rehearsals beginning August 23rd - end of Sept, totaling 4 hours a week, and rehearsals in Nov, Dec & Jan (times TBD). expandance has booked performances in Boston in January and a tentative week long Ireland tour in April 2012. All performances are paid and travel expenses covered.

Audition will be Wednesday August 17th from 12-2PM. If interested, please email your resumé in PDF format, headshot, and a cover letter introducing yourself to info@expandance.com with 'Audition' as the subject line. We will respond with further information.
Posted by expandance at 3:08 PM No comments:

Hello all,
Here is the playlist Alicia and I put together for Laurie's performance on Sunday. These are all available to download on iTunes -  we've linked to You Tube here for you -

Laurie danced to number 7. The video is up somewhere on Facebook - we'll get it here soon!

- Rachel
Posted by expandance at 1:55 PM No comments:

Improvised Performance this Sunday in Dublin - YOU choose the music!

Laurie Schneider will perform a completely improvised piece using the expandance technique as her starting point. Laurie is a gorgeous improviser, so this in itself will be a beautiful show. But...what? Not exciting enough for you? How's this: Not only will she not know her movements before she steps on stage, she won't know the music she will dance to either.
Alicia and Rachel (both currently in New York City) have created a playlist of 10 songs for Laurie, each of which contains a message from us to her. Some are literal - in the lyrics of a song, for instance. Others are pieces of music that represent a shared history between the three of us.
Laurie hasn't seen the playlist (we're sending it directly to the event's organisers) - nor will she see it until after her performance. The first time she will hear the music will be when she is already standing in front of you, in her first moment of performance. And YOU dear audience, will get to choose what Laurie dances to. When you enter the performance space on Sunday, you'll be asked to choose a number between 1 and 10. Don't think about it, just blurt out the first number that comes to mind. Laurie will dance to whatever song corresponds to the number on the playlist most popular with the audience. In the event of a tie, a coin will be flipped to determine the song.
The playlist will also be available to audience members after the show, should any of you be interested in viewing it and talking to Laurie about the meaning behind our choices. And we'll put it up here on the blog.
Laurie's intention behind this work is in essence to have Alicia, Rachel, and her audience in charge of the piece. Vulnerable? Yup. Courageous? We think so. Magical? It just might be!
Check it out. 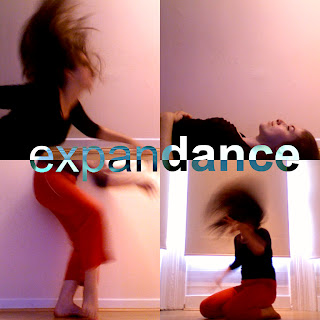 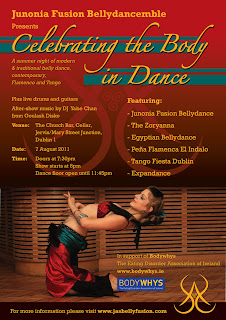 Performance takes place in The Cellar of Church Bar as part of 'Celebrating the body in dance' - A summer evening of dance filled with belly dance, flamenco, tango performances, live music and dancing, hosted by Junonia Dancemble . This event aims to celebrate a positive body image through dance and to promote a familiarity with the work of Bodywhys! There is no cover charge at the door and audience will be given the opportunity to make a donation if they so wish! http://www.bodywhys.ie/
Posted by expandance at 7:11 AM No comments:

expandance
The company was founded in Dublin, Ireland, in 2006 by Rachel Wynne, Laurie Schneider and Alicia Christofi-Walshe, and is currently run by Rachel out of Northern California.